Remembering 1975, freedom of the press was attacked in Indira Gandhi’s era. If we remember, all the leading national newspapers were blocked by the Congress govt, which was announced by President Fakhruddin Ahmed as the emergency was declared citing threat to the national security by “Integral Disturbances.”

Personally, I may dislike or hate someone or can’t accept others’ opinion which does not mean to arrest and put into the jail that person. If Sonia Gandhi is thinking that she is the daughter in law of Indira Gandhi then it will be one of the most prominent reasons for abolishing of the congress party. As we see, across India, there are few many states in their hand and if it continues then no one can save the Congress from abolishing in Indian Politics.

Now it is 2020, once again “Freedom of Speech” is attacked by the same (Sonia-Uddhav Government) in Maharashtra. According to Indian Constitution, no one has the authority to stop freedom of speech as India is the largest democratic country across the world. Here we all can raise our voice which may be in favour or against. But that does not mean, the state administration or the government can arrest “A Journalist” to satisfy their personal ego.

Now let’s move to 1975 when Indira Gandhi asked all the Indian Media to stop publishing any editorial and happened what? Renowned publishers like Swarajya, Janata, Himmat, Frontier, Sadhana started to left blank their editorial pages empty. This movement was started by The Indian Express and The Statesman and after that, all the other publishers started following the same.

Suppressing of the voice of the Journalism or a journalist called the ruin of Indira’s era. At that time Indira’s statement was, “Look. I have imposed emergency, censorship; I have detained people.” Actually, as the daughter of Nehru, she imposed the emergency to fulfil her ego and show her arrogance, but as per as the rule of the universe, the devastation of India Gandhi was seen soon.

Now, if I compare this with Uddhav Thackeray, he is also misleading his government in Maharashtra like, “As I am the son of Bal Thackeray”, although time has changed a lot. The entire media has globalized now. It is sure that his arrogance will take him up at the end soon. It may be six months or years. Because, “History repeats itself”, no one is the life-long ruler in the world.

A politician is always elected by the people in a democracy, that’s why the government is “for the people, by the people, of the people.” But I guess, Uddhav forgets each and everything due to his high arrogance, attitude and boastfulness. The proverb says, “Pride goeth before destruction”, and it is already assuming that the time of Uddhav is going down and will come soon at an end.

After a month Kuldip Nayar was released, and the same thing will happen that Arnab also will be released soon. Now the question is, what will happen after that? “A pen can never bow down to a political leader, it will be much stronger and if it continues then day by day people will be united to suppress the ruling government and downfall is assured.”

I don’t want to go the reason why Arnab was arrested by the police in Mumbai, but the way of arrest is really condemnable in our Indian Democracy and it is also “Contempt of Constitution”. So, Uddhav and Sonia team must understand the language of Indian democracy, because once again I must say, “History repeats itself”, don’t forget the chair of a public representative can be snatched at any moment. 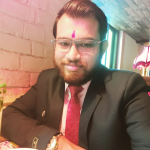